Showing posts from August, 2013
Show all

Queen - A Kind of Magic 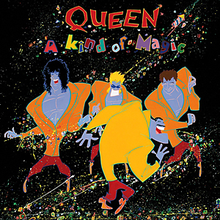 Here we are, Born to be kings,
We're the princes of the universe,
Here we belong, Fighting to survive,
In a world with the darkest powers,

Initially I was going to write about the 1986 film Highlander, for which A Kind of Magic is essentially the soundtrack. But my thoughts kept focusing on the music and thus, here we are.

One of my musical regrets is I never got to see Queen live in concert. I have some memories of seeing them perform on television from the 1985 Live Aid concert with my uncle. But my young musical tastes at the time shifted to more trendy/pop music, something that shifted when I started college in 1989. The early 1990s had me discovering Queen for myself, sadly months prior to Freddie Mercury's death.

Anyways.... A Kind of Magic is an album that just screams fantasy. Epic, ass-kicking fantasy with tracks like "Princes of the Universe" and "Gimme the Prize". A touch o…
2 comments
Keep reading 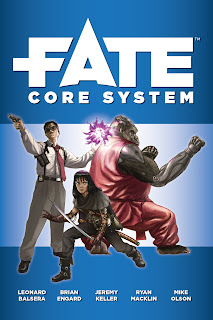 FATE is one of those games in my collection that I really, really want to play some day but haven't had the chance to.
FATE is the game engine that powers games like Spirit of the Century, The Dresden Files, and Diaspora. Relics like me remember the original FUDGE RPG from the 1990s from which FATE spun off of.
Mechanically, FATE isn't too complicated - there is an Accelerated Edition of it which is a rather tiny book. The idea is you role 4DF (FUGE/FATE dice). These are six side dice with 2 pluses, 2 minuses, and 2 blank sides, You add the total together (-4 to 4), add your appropriate skill and other modifiers, and compare to a difficulty number.
The other modifiers I mentioned above is where FATE gets interesting. FATE uses a mechanic known as "aspects". Anything can have an aspect - a location, a person, a PC, a scene, a city. They are basically an interesting description that can drive the action. "Last son of Krypton" would make for a good aspect. So…
Post a Comment
Keep reading 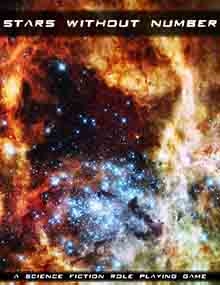 One thing I've liked about Sine Nomine Publishing is they take the adage that old school RPGs should be all about the "sandbox" (i.e. players go wherever they'd like on the map with no predefined plot) and make games and supplements that actually help you do that. As I've built up a modest collection of 1970s and early 80s RPG products I have seen there were a ton of products designed to help GMs do just that.
System-wide, Stars Without Number is pretty similar to early D&D incarnations. It has three classes - Expert, Psychic, and Warrior. It has a simple, yet effective, skill system of which, not surprisingly, the Expert is the best at.
Where it really shines is a default setting which is really made for adventure. The idea is there were two waves of human expansion. The first of which made use of spike drives which allowed faster than light travel in bursts - basically you had to start it from the edge of a solar system and had to turn it off at the edge o…
Post a Comment
Keep reading 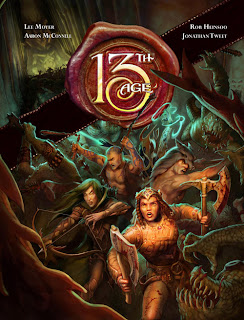 This is a game I preordered but didn't really look at much as I received the preliminary materials. It's a bit of a hybrid of D&D 3.x and 4th editions as well as taking a lot of elements from more narrative based games.
13th Age takes a nod from 4e D&D by giving each class its own set of neat powers but it avoids 4e's tendency to make everything balance out perfectly. It also makes the classes more distinctive from one another, evoking much of their feel from 3.x D&D.
While it has a nice set of customization options for your characters it avoids the tendency of D&D 3.x to punish those who do not have every detail of their character planned and avoids the need to hyper-optimize your character.
It also avoids the dreaded "grind" I experienced when I played 4e, as the game has an "escalation die" which gives bonuses to characters as combats last longer. It also has a number of mechanical tweaks to allow failures to be interesting. Perhaps b…
Post a Comment
Keep reading

Saving Throw vs. GMADD - Some Mini-Reviews

August 30, 2013
Right now I've got an ACKS campaign that is beginning to pick up some steam. So I'm trying hard not to give into my GM ADD - that urge to switch to a shiny new system.

Nevertheless I have checked out a few new systems, some of which I can definitely see wanting to try out at some point. Well all of them really, if I ever had the time... And truthfully they're not really all particularly new, though they are to me. What follows are a series of min-review posts that I may later expand into a more fleshed out review, especially if I get to play or run one or more of them..

I used to think it would take six-hundred years to tunnel under the wall with it. Old Andy did it in less than twenty. Oh, Andy loved Geology, I guess it appealed to his meticulous nature. An ice age here, million years of mountain building there. Geology is the study of pressure and time. That's all it takes really, pressure, and time.  - Stephen King, Rita Hayworth and the Shawshank Redepmption

I want to see mountains again, Gandalf, mountains, and then find somewhere where I can rest. - J.R.R. Tolkien, The Lord of the Rings


I'm with Bilbo Baggins. I love mountains. Before we had kids my wife and I would often spend summer weekends hiking in the White Mountains of New Hampshire. It's certainly had an impact of the campaign settings I've used and created - forested mountains of moderate height, settlements in the notches between them. Lots of rivers and lakes. I look at pictures of the Basin and Range terrain that can be found at west and it is a very alien landscape…
Post a Comment
Keep reading

"Go, now, attack Amalek, and deal with him and all that he has under the ban. Do not spare him, but kill men and women, children and infants, oxen and sheep, camels and asses."


To be honest, it sounds a lot like the behavior of your typical gaming groups mechanism of dealing with a goblin lair. However, that passage comes straight out of the Bible.

I recently finished Reza Aslan's book Zealot: The Life and Times of Jesus of Nazareth. In it Aslan examines what we know and what we can surmise about the historical figure, Jesus of Nazareth. It's a fascinating work, something I will be reviewing in its own right, either here or in my political blog (or in both places, from different perspectives). I'm pretty certain I'd not want to live in  Judea within fifty years of 1 AD. But as a time for adventure, it is an absolutely fascinating period. It is a period of numerous Messiahs who rose up against the Romans in attempts to bring a…
3 comments
Keep reading
More posts