Showing posts from November, 2016
Show all

Doctor West Will See You Now: Zombies in Call of Cthulhu 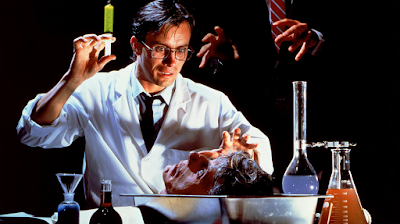 While I've been examining zombie gaming possibilities, I've got a late 19th century Call of Cthulhu game going on. Some of the players in my group suggested we do a zombie Call of Cthulhu  adventure. While we've got the pulp dials cranked up pretty high, I do want to keep the game Lovecraftian. I'm a huge Jules Verne fan and can  see at some point doing a Victorian-era adventure and/or horror game in the vein of Pinnacle's Rippers or Cubicle 7's Victoriana . But for this game I do want to stay grounded in Lovecraftian horror. Which brings us to one of Lovecraft's least favorite creations, Doctor Herbert West, the "protagonist" of his serial "Herbert West - Reanimator". This serial examined West and his obsession with reversing death. To quote the first section of the serial: In his experiments with various animating solutions he had killed and treated immense numbers of rabbits, guinea-pigs, cats, dogs, and monkeys, till he had b
Post a Comment
Keep reading 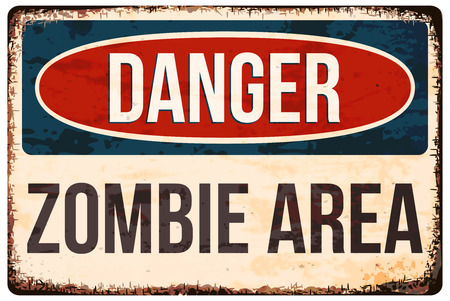 I recently posted some of the games that are distracting me, causing one player to ask me "what about a zombie apocalypse?" So... What about a zombie apocalypse? Truthfully, I've never done an all-out zombie apocalypse game, though I have rather enjoyed liberal use of zombies in D&D games. I've actually always wanted to do such a game, though truthfully I find it a little bit on the intimidating side - while a one-shot zombie apocalypse game is pretty easy to do, the challenge is in keeping the campaign interesting. Obviously, game after game of killing zombies would get rather boring. One of the inspirations I'd take would be Max Brooks' World War Z. While I found the movie to be so-so, I found the book fantastic. Its premise is it is written several years after a zombie apocalypse has been contained, with the author being the interviewer of numerous personalities. Most of the interviewees appear in only one chapter, others are revisited through
Post a Comment
Keep reading

Fake News of the Future 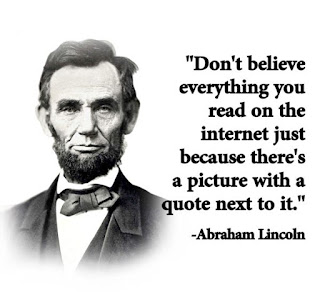 I've been avoiding talking too much about the recently completed US presidential election. I've some very strong opinions on it but it's motivated me to relaunch my political blog where I can have a place to focus on it and leave my geeky blog here relatively nonpartisan. One aspect of the recent election that has caught my eye which does  have applicability to fiction and RPGs is the prevalence of "fake news". For example, I saw the following on my Facebook feed a few gazillion times: The problem with that quote is Trump never said that. For good measure, here is a quote that Clinton never said: These sorts of fake quotes were a serious problem during the recent election, as were news sites which treated them as real. And partisan news sites that took a real story and slanted it beyond recognition to fit a certain world view. As our world becomes more and more digital, this will become a greater problem. How hard would it be to inject a tot
Post a Comment
Keep reading 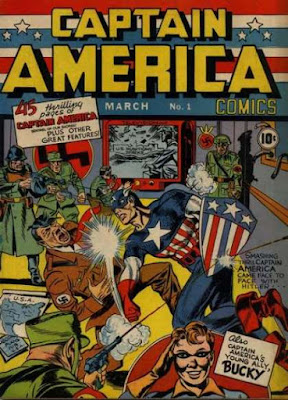 So we've a few Penny Dreadful Call of Cthulhu sessions under our belt right now. Our adding the pulp rules definitely add a bit of a twist - our most recent session had a character survive a blow from a Dark Young of Shub-Niggurath that would have been fatal in a non-pulp rules set. I've got the next 2 adventures pretty much ready so of course I've been flipping through other gaming stuff on my shelves. The Star Trek RPG playtest is coming up - we've had some thoughts of trying that out. The playtest materials should be out soon so we'll see how that looks. The Golden Age Champions Kickstarter just funded so at some point in the future we'll be trying that out, either with the Hero rules or with another superhero rules set - the product itself will include material for Mutants & Masterminds and for Savage Worlds  so should the Hero System scare me too much we'll have other options. Some Nazi punching may prove rather soothing after a stressful
Post a Comment
Keep reading

I Think I've Failed an Aging Check or Two 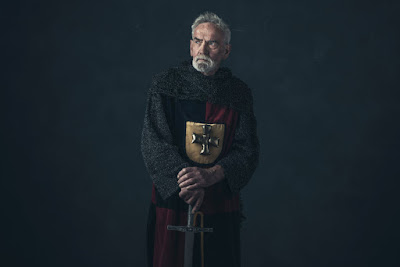 Most RPGs have aging tables, typically for long campaigns, where a character's ability scores over time. Often there's a bit of a balancing act where older characters tend to have more experience and influence, at the cost of diminishing ability scores. In games like Pendragon , your first character is pretty much doomed to die - even if he survives every battle, the length of a Pendragon campaign spans multiple generations. One of your first goals in Pendragon is to have a son and heir who will take over upon the death or retirement of your first character. I've had a few rude surprises over the past few years as I've entered my mid-40s. As my optometrist predicted a few years back, my improving distance vision was not a good sign but rather one that my near vision would begin declining. I'd reached the point where I'd find myself removing my glasses to read really small print. I'm now wearing progressive eyeglasses which improve my reading visio
Post a Comment
Keep reading 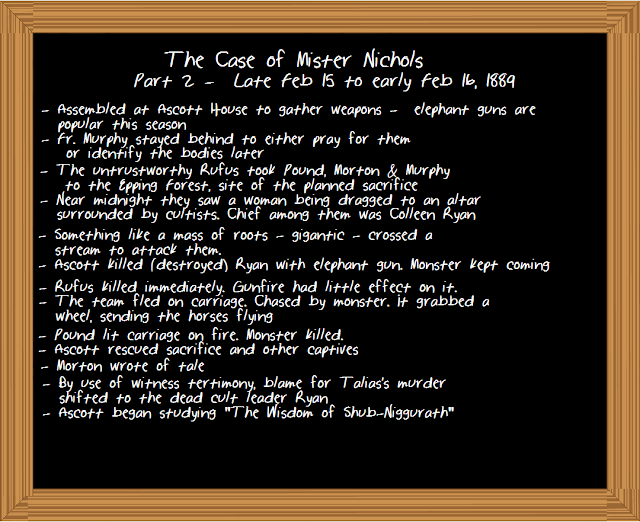 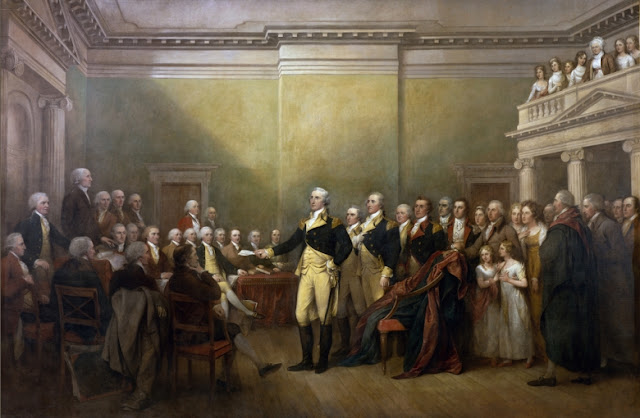 There is nothing wrong with America that cannot be cured with what is right in America.  - Former President Bill Clinton How does a bastard, orphan, son of a whore And a Scotsman, dropped in the middle of a forgotten spot In the Caribbean by Providence, impoverished, in squalor Grow up to be a hero and a scholar? - "Alexander Hamilton", Lin-Manuel Miranda  Fun fact - when I was looking for the source of the first quote  above I was fairly certain it was actually said by President Reagan, not Clinton. Some of my European and Asian/Pacific friends are puzzled by American patriotism, seeing it as strange to be proud of something that is an accident of birth. And some of my more conservative friends wonder how liberals can consider themselves patriotic, always complaining about the bad things the United States has done. Let me give you my own view. It is strongly informed by the Catholic social justice teachings I received at Sacred Heart High School as well as
Post a Comment
Keep reading

Fixing the Poison of American Politics - Cleaning Up Redistricting 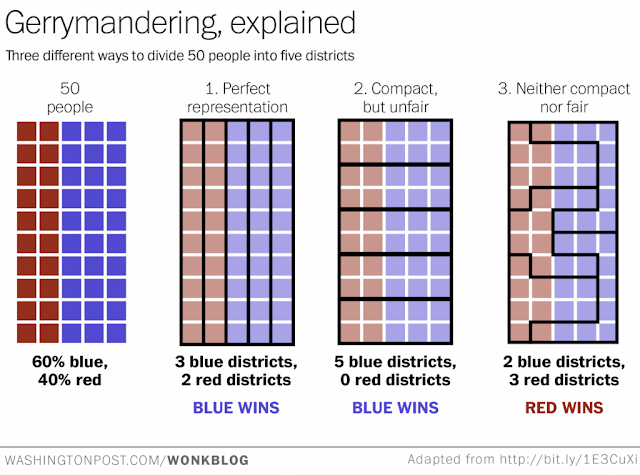 I'm writing this the night before Election Day in the United States. Once the votes are tallied, a sizable percentage of the population will be convinced that the country is doomed. Cards on the table, I'm definitely a partisan. Though a fairly liberal Republican in my 20s and early 30s, I've transitioned to liberal Democrat. That probably puts me in a minority of people who voted for both Bush and Obama. Basically, as I've grown older I've come to the conclusion that not everybody gets an equal shot and some people have horrible luck - whether in their parents, their genetics, their choice in careers, or what have you. And I believe that the government has a role to play in smoothing out the extremes of wealth and poverty. With that in mind, I suspect people of any ideology will agree that American politics are in a very sorry state. If you ask me for my opinion as to why, I think the biggest answer is that politicians get to pick their voters. This is probably
Post a Comment
Keep reading

The Next Generation of Comics Readers 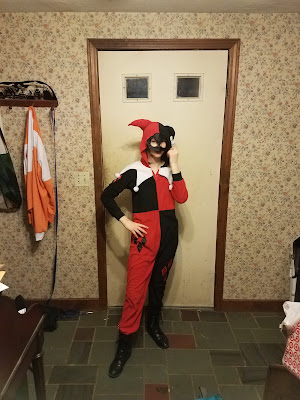 "It's not a comic, it's a graphic novel." - Jasmine (my 11-year old daughter) Today Jasmine and I went on a comic hunting expedition. While my daughters have accompanied me on comic books in the past, this was rather neat in that she was the one who wanted to go on it. Over the past several months she's begun reading comic books. I have to confess to being rather proud. My late uncle told me used to be a comic reader in the late 1950s, being a big fan of the Flash. It's nice to see a third generation enter the hobby.  Jasmine is quite the fan of Harley Quinn and has begun branching out into the Batgirl of Burnside series. I think the nonconformist nature of Harley has a certain appeal to her. She dressed up as Harley Quinn for Halloween this year. I've been steering her clear of the more intense comics for the time being - she'd asked about The Killing Joke , knowing it featured Barbara Gordon (though not as Batgirl) but I suggested that tha
Post a Comment
Keep reading 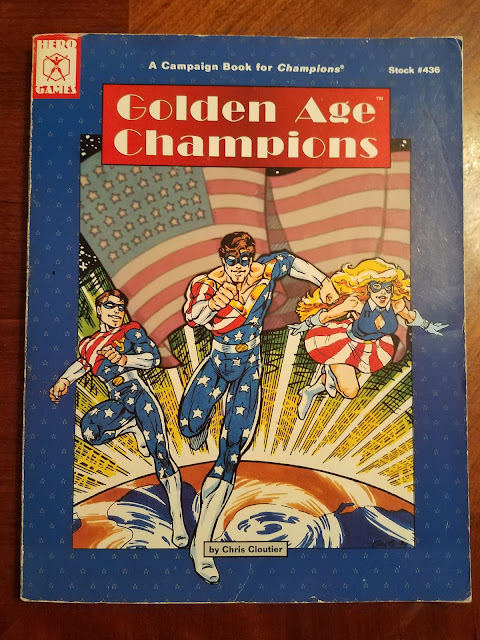 The version of Golden Age Champions that I have dates back to 1994 and was published by Iron Crown Enterprises for the 4th edition of the Champions RPG. The first 30 pages deal with the campaign premise. It discusses possible campaign lenses such as a more Dark Champions campaign (with characters more like the Spider, the Phantom, etc.), super-patriotic games, and something in-between. It gives a brief history of the Golden Age of comic books, different types of package deals for characters of the period, a discussion of draft deferments for those characters who will not be participating in World War II, etc. Next up is a large section of historic source material. It covers people and organizations of the period, a glossary of WWII and homefront terminology, and three parallel timelines - the real world, the Champions universe, and and "Axis Victory" universe. Regretfully these timelines only cover up to 1946 - it would have been interesting to see them go a bi
Post a Comment
Keep reading 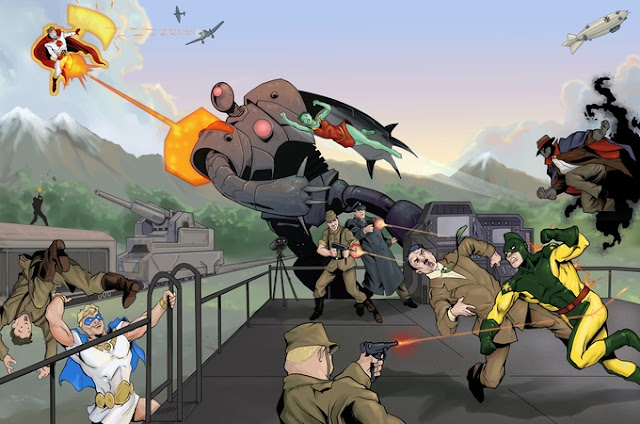 High Rock Press currently has a Kickstarter going for Darren Watts's  Golden Age Champions . You should go support it. It needs about $5000 more over the next two weeks to reach its $20,000 goal.  I'll offer my own reward... Assuming no hiccups in my regular gaming, I'll run a Golden Age Champions campaign and write about the experience. It should make for interesting reading as while I've read a number of Hero products and played in a few games in college, I've never run a Hero game. Champion Complete  peels away many layers of complexity from the 5th and 6th edition Hero games - fine games, but games whose crunchiness really started loading up. My impression is that while Champions Complete  is based on the 6th edition of Hero, it seems to be closer to the 4th edition in complexity (the version I played a few times). I've got some Golden Age maps of Port Henry to break out - the Earth-38 version of Port Henry of course. High Rock Press did a gre
Post a Comment
Keep reading 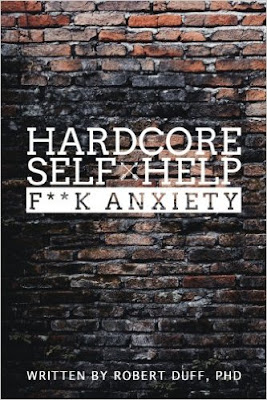 Imagine my surprise when I discovered that F**k Anxiety  was actually a book title. I checked it out last week, it's actually rather well done, especially the audiobook version read by the author, Robert Duff. I've dealt with Generalized Anxiety Disorder for the past 12 or 13 years. I've not had a horrible case of it - even when it's at its worse I manage to still perform well at work, maintain hobbies, etc. Every once in a while it decides it wants to take another try at kicking my ass and over the past month or so it's decided to make another run at making my life miserable. While I managed to juggle the misery of worrying about everything with my job, family, and schoolwork, I noticed that I missed my October 31 blog posting. For those who haven't noticed, I have an odd fetish for making blog updates on prime numbered days. It's not an OCD issue (something I've learned quite a bit about) - I've made posts on other days as well, I came up with
Post a Comment
Keep reading
More posts