Heroism in the Cthulhu Mythos 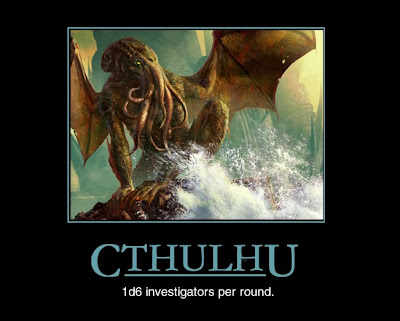 We recently finished a Call of Cthulhu scenario in my group (we'd been playing ACKS but we needed something with a bit of a lower quorum threshold - decided to whip out that old favorite Cthulhu to see how it worked out). Having played The Haunting scenario with this group we played another of the classic adventures, The Edge of Darkness. I'm not going to go into spoiler territory, suffice to say it provides ample opportunities for investigators to meet horrible end. In our playing of it there was one PC death and many more were avoided by making some difficult, at times brutal decisions, including going up against police in order to be able to succeed in a ceremony to banish an eldritch abomination - one of those "for the greater good" circumstances.

I've heard Call of Cthulhu described as a non-heroic game and when you think about more over-the-top superhero and pulp games I can definitely see the point. The premise of the Cthulhu Mythos is that of an uncaring universe full of abominations that could wipe out humanity with ease. Yet I've found that in scenarios against such creatures there is ample opportunity for heroism - being the people that brave such encounters, that hold back the darkness for even a little while, is its own brand of heroism. It's one that demands extreme caution, where bad luck can by itself be fatal and going in with guns blazing and no knowledge will almost certainly be fatal.
call of cthulhu home campaign