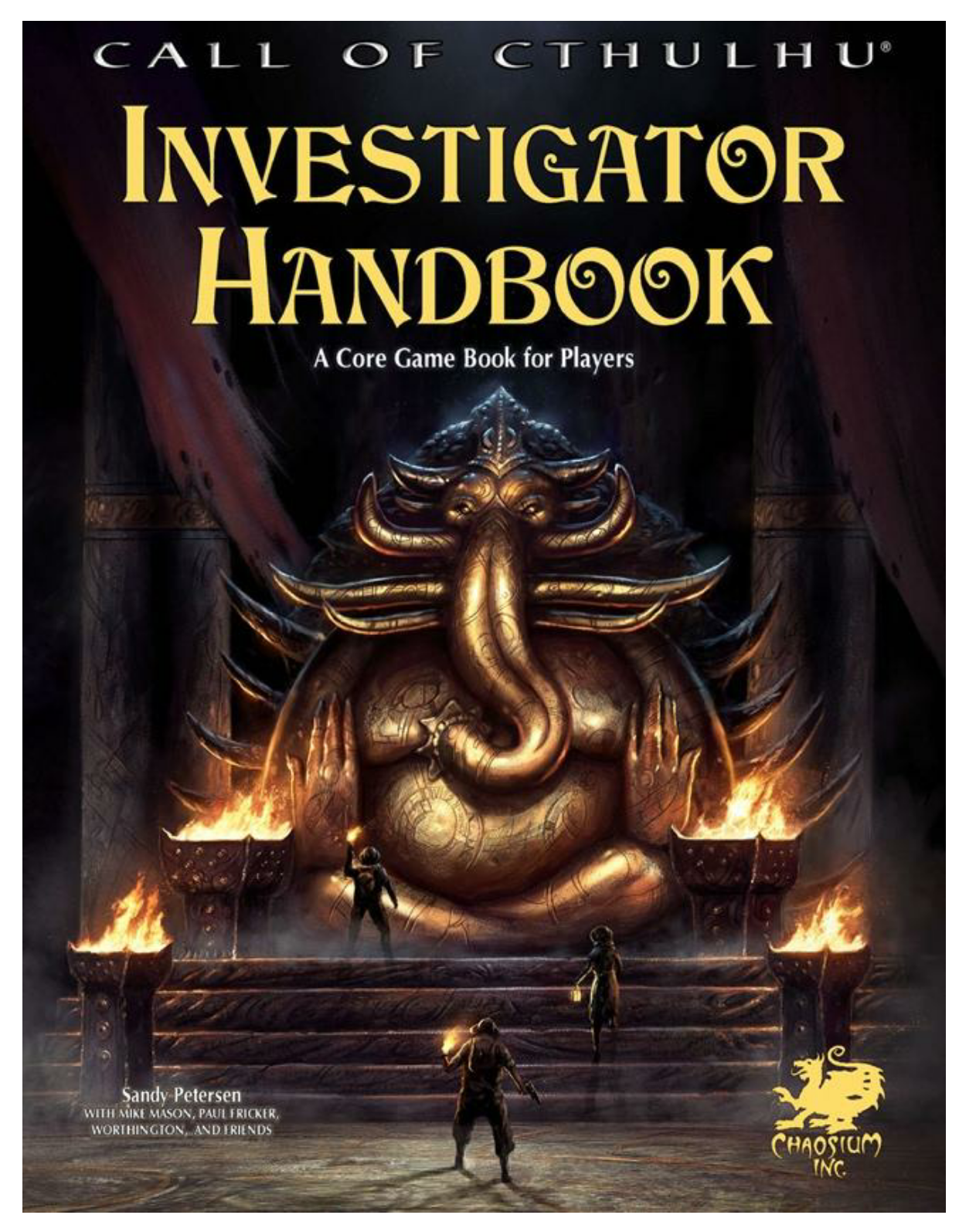 Even though I go through various other games, sometimes for a while, sometimes for a brief spin, I keep on finding myself working my way back to a Call of Cthulhu game. I've recently just finished my first session using the newest incarnation of the game, the 7th edition.

I've noted before in this blog that there's tons of shinier games out there. What I've found is Call of Cthulhu has the virtue of just being darn playable.

One thing Call of CtThulhu has been known for is how little changes from edition to edition. An edition war in Call of Cthulhu  is pretty much unheard of. I've used adventures from the 2nd edition of the game in a 6th edition campaign with conversion, even on the fly, being wholly unnecessary.

So though I've talked about Call of Cthulhu here before, let's do a little recap. The Call of Cthulhu RPG is based on the writings of early 20th century writer Howard Phillips Lovecraft. Lovecraft's central premise was that humanity is ignorant of its insignificant place in a vast and uncaring universe populated by beings so alien they may as well be considered gods. And this ignorance is a good thing, for those who learn too much tend to go insane.

The Call of Cthulhu RPG got its start back in 1981. Looking at the stats for a Call of Cthulhu character and you see a lot in common with D&D of its day - characteristics like Strength, Dexterity, etc. in a range around 3 to 18. Unlike older versions of D&D though the game is centered around a skill system, with your rating in a given skill based on a score of 1 to 100, giving your chance at success when applying a given skill. It sometimes needed to be emphasized that you only roll when failure is a realistic possibility - you don't need to roll a Drive Automobile skill to park at the local mall. On the other hand, to maneuver your car in a high speed chase - then you need to make a roll. Unlike most games Call of Cthulhu stayed clear of difficulty ratings. It used hit points, though even as you advance they don't go up - your hit points represent your ability to absorb physical damage. They are not the abstraction they are in D&D. To avoid getting hit you would typically use your Dodge skill.

Perhaps more important than hit points are your sanity points. Run out of them and you are permanently insane. Indeed lose too many at once and you'll be facing bouts with insanity. You lose sanity from casting spells, seeing horrible things, etc. And your Cthulhu Mythos skill, the only skill which defaults to 0%, places a maximum cap on your sanity points. The higher it is, the lower your sanity cap is.


There's been some trepidation about this new version of the Call of Cthulhu RPG. It would be reasonable to say that this new 7th edition represents the largest change in the game since it was first released. Since I've been talking rules thus far, I'll continue to do so prior to giving a big picture view of the new game.

I'll preface this by saying that even with a change as large as this I was able to use a 5th edition adventure with no difficulty at all. I made changes to the adventure, but they were not based on problems with the rules but rather tweaks I made as GM that I felt would better fit the game.

So what are the big changes as far as rules go?


I'm sure there is more but those are the big ones I can think of off the top of my head.

How does it play? From my first session with a mix of people I've gamed with before and people new to me, it seemed to play an awful lot like older versions of the game. It is not a crunchy game - in our 150 minute long session I don't think we had any long periods of dice rolling like in a combat-heavy game - and our adventure took place during World War 1!

The presentation is rather different. There are now two main books. There is the Investigator Handbook and the Keeper Rulebook. The Investigator Handbook is built for players and centers around character generation, occupations, skills, how to adventure, organizations you might join/form, etc. The Keeper Rulebook covers a lot of the same ground in the sense it has occupations, skills, etc. but it is far more geared towards keepers. There are less character generation options, discussions of adventuring organizations, etc. and instead sections on combat, task resolution, sample adventures, creatures, spells, etc. A keeper doesn't need the Investigator Handbook but it is very handy to have.

I can't speak towards the physical books as they currently exist only in digital form. The digital versions of the books come in four forms (all bundled together - briefly they were sold separately but Chaosium quickly changed to bundling them). They are:
I'll focus on the PDF. It is a gorgeous book. For the first time the Call of Cthulhu game is presented in color in its English version (I believe the French and perhaps German versions have had color editions). The art is new to me and seems very nice. The text is easy to read and the PDF files are nicely bookmarked with lots of internal linking. The mobi and epub versions keep all of the illustrations and are also nicely bookmarked and linked. Someone spent a lot of time preparing first rate digital versions and I am very pleased with the presentation. I've loaded them into Google Play Books for my Android devices and have also taken advantage of the mobi files on my Kindle reader. The only negative is the mobi files are a bit big - the rulebook being too big to add to my Kindle library (i.e. the Amazon cloud storage) but I was able to transfer via usb easily.

One negative. Much to my surprise, the classic adventure "The Haunting" is not part of the main rulebook (though it is available in the free quickstart for the 7th edition.)

I'll talk more about these as my gaming with this edition continues. My main takeaway is that while it does represent the biggest change in the Call of Cthulhu rules since its inception, I consider those changes to be more along the lines of cleanup/refinements rather than the massive changes seen in different versions of D&D over the past few years. Combat is still incredibly dangerous, sessions can be played with a minimum of dice rolling, and intelligent play still works better than going in guns blazing. I'd have to say it's still my favorite RPG.
call of cthulhu rpg review