Ghostbusters RPG and the D6 System 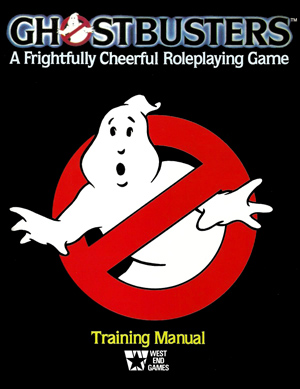 In the early 2000s one of the complaints I recall about Wizards of the Coast's d20-based Star Wars RPG  was it was simply "D&D in space" vs. the previous Star Wars RPG as put out by West End Games. While I had a number of fun Star Wars games using the d20 versions, I have to confess to a bit of a preferences for the West End Games versions. Though in a sense, you could have called that game "Ghostbusters in space".

Alas, my copies of Ghostbusters suffered in the regrettable basement flood several years ago triggered by the kiddies forgetting to turn off the bathroom sink. Oops. I've managed to reassemble some bits of it and hypothetically speaking there might be some scanned copies out there. Of course with the new movie coming out I saw a copy of the original RPG going for $3000.00 on Amazon. I'm thinking some automatic pricing algorithm is going a little loony right there...

Anyways, recently flipping through the original version of the game I was amused to recall it was written by Chaosium. There is a certain amount of amusement knowing they did both Call of Cthulhu and Ghostbusters. I suppose that covers the extreme ends of the supernatural spectrum, from cosmic horror to a humorous take on the supernatural.

Also, unless I am mistaken, the Ghostbusters RPG represents the first appearance of the D6 System, made famous by the Star Wars RPG. It's in a basic and primitive form, though given it is for a humorous RPG, that is largely as it should be. It has four attributes - Brains, Cool, Moves, and Muscles. Each of these is rated by a number, representing the number of D6 you roll when a character uses that attribute, rolling against some difficulty number. You also have one talent for each attribute - essentially a single skill, which gives you a bonus of 3 dice when using that attribute for that talent.

Characters have Brownie Points which kind of work both like a sort of hero point mechanic as well as hit points. You can use them to get extra dice and to avoid nasty things happening to you. And when you are hurt, the damage comes out of Brownie Points - though the damage rules are very light, with just rough guidelines for how much damage you take from physical attacks. The rules for combat with ghosts are actually a bit more detailed - though given the subject matter for the game, that seems pretty reasonable.

And in a sneak preview of the Wild Die (which would not be used in the 1st edition of the Star Wars RPG), there's also the Ghost Die, with a ghost on one of the faces, indicating something pretty lousy has happened. Every dice pool needs to use it as one of the dice.

The tone of the game is very, very light, with anecdotes and asides from the main characters of the Ghostbusters film. You can play one of them or you can make your own franchise.

My own experience with Ghostbusters was of playing the occasional standalone game of it. For some reason I'm getting a vision of adapting a few Call of Cthulhu adventures for it.

It's interesting to note that with its first RPG of Paranoia and its second Ghostbusters, the first RPG efforts from West End Games were of a rather humorous nature - darkly humorous in the case of Paranoia. They both had rather good production values for their day, with Ghostbusters having many in-universe artifacts like franchise agreements, last wills and testaments, etc. One of the appealing things about the Star Wars RPG was its continuation of such production values and genre emulation, with dueling propaganda from the Empire and Rebel Alliance, advertisements for R2 units, etc.
D6 System Ghostbusters rpg review star wars rpg West End Games