Child and Adolescent Protagonists in RPGs 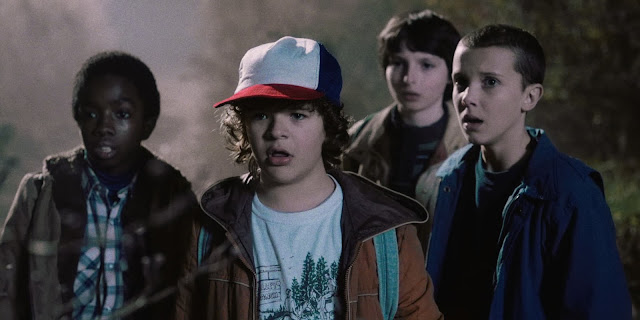 I'm working my way through season 2 of Netflix's Stranger Things. I've commented previously that one of the things I find fascinating about the show is I was the same age as the characters at the time the show takes place - in fall of 1983 I was 12, just like the characters on the show.

With an 12-year old with a massive taste for reading (some very advanced stuff), I've had cause to reread It to make sure I was able to discuss it with her. It's caused me to reflect on the amount of fiction, film, etc. where some or all of the protagonists are children - preadolescents to adolescents. Just from media consumed in the past few months I can think of:


I'm also contemplating the overlap of these with young adult fiction - both feature children - typically of early to mid adolescence - while young adult fiction is primarily targeted at young adults. In this category I can think of Harry Potter, the Hunger Games, the Fifth Wave, Divergent, etc. Looking through that list, apocalypses are big...

Looking at the list I've compiled, when I think of RPGs with child protagonists, the model I would go for is one with a normal society and a monster that is "hidden". Something like It and Stranger Things - the world appears normal - the kids aren't part of an elite monster hunting organization, though they may be special in some way. The world is normal - people don't believe in monsters. What is striking to me about both those examples is they were written by their authors such that the time period marked the authors' own childhood time period - It's early sequences taking place in 1957-1958 while being published in the mid-1980s and Stranger Things taking place in the 1983-1984 (so far).

I can see some good logic behind this. Though I've two daughters, 12 and 15, I'm not with them all day. I don't know perfectly the give and take of the school day or the "language" of them and their peers. It's a lot easier for me to go back to my adolescence of the 1980s. The 1980s weren't a retro period, they were normal to me and my peers. I remember the explosive emergences of Michael Jackson and Madonna. Party invitations distributed on paper (not that a geek like me got invited to much).

As I write this, it seems the horror/paranormal genre is what I'm thinking of. You've got your kids who have a connection with the supernatural. No one will believe them - certainly no adults. And in a period game, they lack the technology to record proof of such encounters. Such characters aren't "warriors" so while combat may be a part of such a game, running and fleeing will be an essential combat strategy. Kids need to worry about curfews, making it to school, etc. One of the things that makes such tales so compelling is we experience the challenges of the protagonists' mundane worlds.

While I've played a game or two with one of the PCs as a child, I don't believe I've ever played one with a children-only set of protagonists. As many of us become parents, there's certainly a bit of a trigger in playing a game with children in danger. There's not many games specifically meant for child PCs. From memory I can think of Monsters and Other Childish Things, Little Fears, and Innocents (for New World of Darkness/Chronicles of Darkness). I suspect a Gumshoe game would work rather well for such a game. Most such tales tend to be limited in duration, though Stranger Things looks like it will eventually span several years. It presents an interesting challenge - the monster you defeated as children has returned. Can you defeat it now, no longer able to believe in magic as you once had?