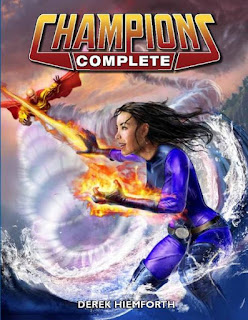 With the release of the new Golden Age Champions, at some point in my future there's a Golden Age superhero campaign (not this calendar year though - still adventures to do in Hyperborea). Though much of the writing and art of the Golden Age of comics is extremely juvenile (with a much younger audience in mind), I've always liked many of the "big ideas" of the era. I'd love at some point to do a game that establishes a superhero universe from the start.

I'd like to get a good campaign going with Champions itself - the Hero System, of which Champions is a part of, is one of those games that have been on my bucket list for some time. One additional hindrance to me is given I use Roll20 for gaming nowadays and there's only a basic Hero System sheet there. Mind you there's none for our current game of Astonishing Swordsmen and Sorcerers of Hyperborea at all, though I sometimes think of trying to tweak an AD&D sheet into one. My hunch is I'll want some additional digital support to pull it off. I've picked up the Hero Combat Manager in the hopes of both using it to allow me to do some tinkering on my own time as well as to have a tool to use during games (and possibly share using Skype).
Hero System