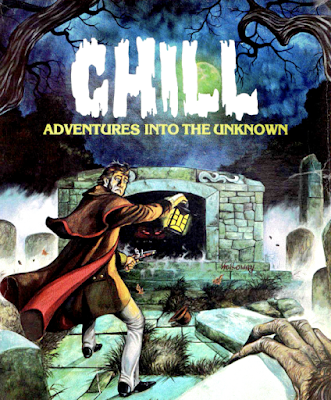 It's very strange doing a "first impressions" type of review of a game from 1984 but Chill was one of those games that I never managed to get ahold of when it first came out. I remember the numerous advertisements in Dragon magazine at the time for Pacesetter Ltd. RPGs - they all looked interesting to me but alas, my middle and high school funds to did not allow me to pick them up. Though for some reason I was sorely tempted to splurge on Chill so I could get the Elvira adventure compilation. I suspect puberty may have had something to do with that... 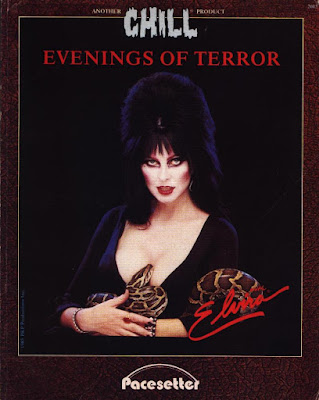 I've recently had the opportunity go through the original game. It's definitely an old-school game, based around percentile-based ability scores and skills. There are two types of task rolls, general and specific checks. A general check is a straight percentile roll, looking to roll equal to or below your stat. With a specific roll you do a lookup on a table to see how well you did, using your margin of success to determine your row and your column being somewhat variable. In combat the defender would actually roll a d10 to determine the column, with higher being more advantageous to the defender. See below for the Action Table included in the game: 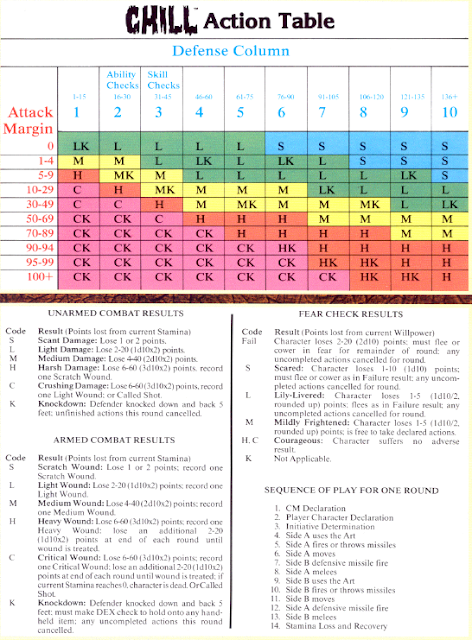 It definitely reminded me of the old Marvel Superheroes RPG from TSR - and I'm not quite certain which came out first - they both have 1984 copyright dates.

Characters have two pools to be concerned with - a Stamina pool which is used to track physical damage and a Willpower pool which can be lost on fear checks the characters might be forced to roll - a bit like Sanity in Call of Cthulhu.

As can be seen from the table, damage is independent of weapon type, much like original D&D. Weapon types do matter for range, attack rates, special qualities, etc.

Moving a bit away from the technical aspects to the nature of gameplay, Chill characters work for an organization of good guys, dedicated to fighting the supernatural baddies of the world. This organization is S.A.V.E. - the Societas Argenti Viae Eternitata. Reading through the book, I get a feel of classic horrors - Dracula of both literature and film fits in well in this setting - indeed Dracula has been featured in the adventure Vengeance of Dracula, very much in keeping with Bram Stoker's incarnation of the vampire. The game assumes one of two main era - the late Victorian era or the "modern" day (which, when published, was the mid-1980s). Rules-wise, there is no real difference between the two eras.

Chill seems to occupy an interesting middle ground between your cosmic horror of Call of Cthulhu and your monster hunting of Buffy the Vampire Slayer. Humanity is not necessarily doomed but it is very much threatened. Our heroes may have some mystical ability in "the Art", but no one is going to be hurling fireballs. The suggested reading gives an idea as to the tone of the game:
I have a very vague recollection of a friend GM-ing a one-on-one Chill adventure for me - I was Jonathan Harker in Dracula's castle. I got to be dinner for Dracula's brides. I didn't do so well but I remember it being fun. Looking at the rules today, they definitely reflect their era - a lot of specific tables for various tasks the characters might perform. That said, it's very much the kind of game that one could be given pregenerated characters and be able to play with the briefest of rules explanations. Like early versions of Call of Cthulhu, it has no real concept of difficulty modifiers outside of combat. It's the sort of thing that seems awfully easy to house rule should one wish to.

I'm aware there's two "successors" to Chill. A 3rd edition of Chill was put out a few years ago by Growling Door Games. I don't know much about it, though some quick internet searching shows it has its share of controversy, with some loving the new game, some despising it. (Mayfair put out a 2nd edition of Chill for a time after Pacesetter ceased operations). Goblinoid Games, with rights to the Pacesetter name and rules, has published a kind of retroclone of Chill 1st edition named Cryptworld. Alas, there is no legal PDF version one might purchase for the 1st edition.
chill horror rpg review