"The Last of Us" from an RPG Perspective 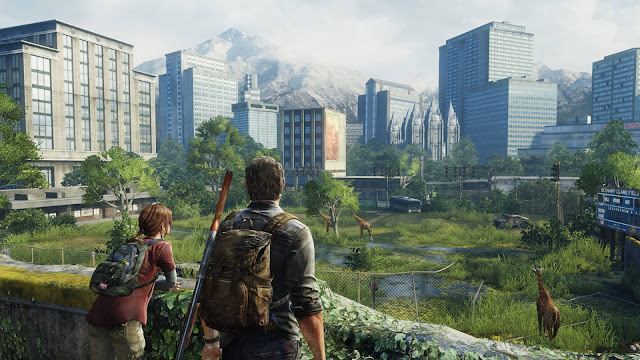 With a two week break between classes at Brandeis, I had a little bit of time to goof off and make use of the PS4 I received as a birthday gift last month. I finally made my way through Naughty Dog's The Last of Us. This isn't really a review of the game, there's about a gazillion out there on the internet - though I will give a brief overview of it. I'll also note there are spoilers about the game in this post so if you've not played it and want to play it unspoiled, you should read no farther. A bit unlikely for a game released in 2013, but just in case...

The Last of Us tells the tale of Joel and Ellie in a post-apocalyptic world. Joel is a survivor of the original outbreak in his late forties. Ellie is 14 and for unknown reasons, is immune to the infection.

In September of 2013 a mutant Cordyceps fungus wipes out civilization. Cordyceps is a real kind of fungus and is a parasite, with some species able to alter the host's behavior. Luckily for us, Cordyceps species prey on insects. Stranger Dimensions has an article about this creepy fungus. In the setting of the game, a mutant form is able to infect humanity and brings about, for all intents and purposes, a zombie apocalypse. To be technical, these are not zombies - they are still alive. There are two ways of getting infected - by airborne spores (stock up on gas masks) and by, of course, a bite from an "Infected".

A host goes through different stages of infection, leading to different types of Infected:

The game, after a brief prelude in the early stages of the infection, takes place about twenty years after the outbreak. All that remains of the United States are a series of "Quarantine Zones", ruthlessly administered by a FEMA expy called FEDRA. Most of these zones have fallen, either to the Infected or due to revolt. The only one that is certain to still exist is in Boston - zones in Hartford, Pittsburgh, and Salt Lake City are known to have fallen. A revolutionary organization, the Fireflies, hopes to restore the United States and is looking for a cure to the infection. They're not saints and can be very ruthless in pursuit of their goals. They successfully organized a revolt in Pittsburgh but in the aftermath the rebels also wiped out the Fireflies and became "Hunters" who preyed on "Tourists".

As can be seen, beyond the Infected, other humans are often a great threat. At the start of the game, Joel, a survivor from the original outbreak, wants nothing to do with any of the major factions, working as a smuggler in the Boston Quarantine Zone. From dialogue one gets the impression he and his estranged brother Tommy did some rather ruthless things to survive themselves. Tommy wound up working with the Fireflies for a time, but became disillusioned. He eventually goes on to become one of the leaders of a settlement in Wyoming which is in the process of restoring electricity.

In the outskirts of Pittsburgh a group of survivors had, for a time, a succsesful settlement hidden in the sewers, founded by a man named Ish (a reference to the early post-apocalyptic novel Earth Abides). Some time before the game starts it is overrun by Infected. In Colorado, another group of survivors has resorted to cannibalism to survive.

The game itself follows Joel and Ellie. Joel has been hired by the Fireflies to escort Ellie out of Boston to get her to a Firefly lab where they hope to find why she is immune. Over their long journey, the two begin to bond. She is much like Joel's daughter who was killed in the first days of the outbreak.

The setting serves as a great example as to how one might have a long-term RPG campaign in a post-apocalyptic setting - in this case, a form of zombie apocalypse. It gives us characters with a variety of motivations. There are a number of human factions. The "zombies" are varied (much like in the Infected! RPG from Immersion Studios). It offers great opportunities for sandbox style gaming, allowing the PCs to form and/or take charge of a community and become involved in defending it. In the game, Ish's sewer complex and Tommy's Wyoming settlement offer great examples of "good guy" type settlements. One can also picture a campaign set in a city like Pittsburgh where the people rebel against FEDRA but the revolution devolves and savagery.

It's worth noting that in many places the scenery of the game is absolutely gorgeous. Often apocalyptic settings are portrayed in muted and dark colors. The Last of Us is often alive with green. Aside from the fact that either an Infected or a fellow human is out to kill you, it looks beautiful.

Were I to use this as an inspiration for an RPG, I don't know that I'd necessarily use the setting as-is - it can simply serve as a great inspiration for an All Flesh Must Be Eaten or an Infected! campaign. Oddly, I can think of a number of OSR style games that could be used for this style of game. I think ACKS's domain play rules could make for an awesome post-apocalyptic community management system. Sine Nomine's An Echo Resounding, an add-on for OSR games also would work well and the setting of their Stars Without Number could also use elements of The Last of Us for inspiration - both how communities might have survived the Scream and for threats faced by an individual world.
ACKS Infected RPG OSR Stars Without Number zombie apocalypse