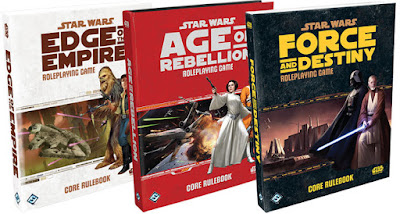 As I mentioned in my last post, I'm teaching my younger daughter how to game using Fantasy Flight Games' incarnation of Star Wars. I'm thinking of doing a few posts where I do a bit of an examination for their incarnation of the RPG.

To begin, FFG does not have one Star Wars RPG but rather three. They are Edge of the Empire, Age of Rebellion, and Force and Destiny. Each is focused on a specific lens of Star Wars gaming. Edge of the Empire deals with "civilians" - smugglers, bounty hunters, colonists, mercenaries, nobles, etc. If one wanted to run a game like the Firefly TV show or all about characters like Boba Fett, this is the game to use. Age of Rebellion on the other hand, is focused on the Rebel Alliance's battle against the Evil Galactic Empire. Finally, Force and Destiny deals with Force-sensitive characters. All the games provide for potential Force-users, but in Edge of the Empire and Age of Rebellion you are dealing with very basic Force users. The games all assume a time period during the "classic" era - in the range of Episodes IV to VI. They are essentially compatible with each other, with a few narrative rules specific to each game - though each game discusses how it might be used with the other games.

I can see how multiple games have some value, though I'd have preferred a main corebook, perhaps focusing on the Rebellion, with additional books covering other lenses. Fantasy Flight Games has high production values and their books are all very well done, though one annoyance I have with their Star Wars games is the lack of any electronic editions of their books. As I understand it, like Wizards of the Coast before them, FFG is not allowed to make digital copies of their Star Wars books (per their license with Lucasfilm).

The first of these games, Edge of the Empire, was released in 2013. It incorporated material from what was then called the Star Wars "Expanded Universe" - the various novels, comics, etc. for Star Wars. However, in 2014 Lucasfilm announced that outside of the then-six movies and Clone Wars TV show, all previous material was moving to the Legends banner and was "non-canon". It's understandable why they did this - with a new trilogy in the making, they wanted a clean slate. New comics and novels have fit in with this new continuity, as has the TV show Rebels. Material from Legends material is eligible to be brought back into the official canon, though often in a different form. For example, Grand Admiral Thrawn has found his way onto Rebels as have Imperial inquisitors. I bring this up as the FFG Star Wars games make use of a lot of Legends material, especially in their Force and Destiny game.

The next time I write about these games I suspect I'll talk about the mechanics, but it's worth noting here that the games make use of a crunchy system with a strong narrative aspect to it. With a very unusual set of dice...
ffg star wars star wars rpg