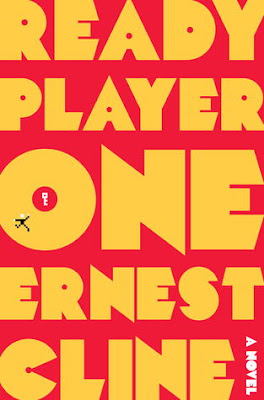 Big hair from the eighties looks normal to me. My best friend from high school - she had huge hair.

This is relevant as the novel Ready Player One  is part love-letter to the culture of the 1980s - especially the geek culture. A 2011 novel by Ernest Cline, I noticed some buzz about it but never got around to reading it. Having seen a number of trailers for the upcoming movie adaptation - trailers from which I couldn't quite tell if it looked awesome or dumb - I decided to give it a read on my time off from both work and grad school at the end of the year. The audiobook is read by Wil Wheaton, which read to a bit of oddness when Wil Wheaton is mentioned briefly in the novel itself...

Ready Player One takes place in a dystopian 2040s. Cheap oil is a thing of the distant past, leading to the United States and the rest of the world suffering from a decades long economic disaster. The protagonist Wade Wilson, is the orphaned child of refugees. American refugees, as people unable to fuel their vehicles flocked to American cities. He lives in the stacks of Oklahoma City - vertical trailer parks - though he often lives in a private hideout. As the novel opens, he is a high school senior, attending a school in the OASIS. The OASIS is a virtual reality world - or rather series of worlds. It was created by two computer pioneers of the 20th and 21st centuries, Halliday and Morrow. Some worlds are gaming environments, others are areas for learning, others for meetings, etc. It has become synonymous with the internet of the future.

When the book opens, Halliday has been dead for a few years. Halliday was an obsessive fan of the pop culture of the era when he grew up - the 1980s. He's a fan of the movies, the video games, novels, comic books, etc. When he dies, he releases a message talking about Easter Eggs in video games. He indicates he left one in the OASIS and whoever finds it would inherit the OASIS. As it is the dominant economic force of the world, it attracts both individual attention (egg hunters - "gunters") as well as corporate hunters.

Wade is far more comfortable in the OASIS as his avatar Parzival. He's a gunter, as is his best friend Aech - a person Wade has never met in person - nor do they know each others real names. Dirt poor, Wade is usually only able to access the free parts of the OASIS.

Halliday left behind an almanac with his musings - which is regarded as clues to finding the three keys to the three gates he spoke of in his death message. As a result the gunters become experts on these musings. The novel as a result has Wade visiting fictional universes such as a classic D&D dungeon, originally published by TSR, and movies like Star Wars, Blade Runner, and Wargames. There are references to old Atari games like Adventure and text games like Zork.

Obviously Wade becomes a player in the competition. Doing so, he becomes friends with many of his rival gunters while running afoul of a major corporation. He even finds himself in love with a gunter he's never met in real life - indeed, he's met none of them in real life.

The technology behind the OASIS is advanced but plausible. At its baseline it consists of a headset and gloves, so it is not necessarily "true" virtual reality. Wealthier people have clothing and chairs which give additional haptic feedback - something Wade is able to acquire duing his hunt for the egg.

Ready Player One was a fun read. If I've a complaint, it would be the amount of info-dump the novel required. But Cline created a world I wanted information about. It's a pretty plausible dystopia, looking at our own attitudes about energy conservation, alternative energies, etc. The emphasis on the 1980s is obviously appealing to someone like me, being born a year or two before than the fictional Halliday. It also comments on the nature of online friendships and relationships. I've made friends with people I've known since the 1990s but never met. I've gamed with people I've never met. And of people my own age, despite growing up in different parts of the country, it amazes me how strong a shared background we have, despite the lack of any real internet as we know it today to connect us. Starlog magazine, shared games and movies, shared D&D adventures, etc. all give us a common frame of reference.