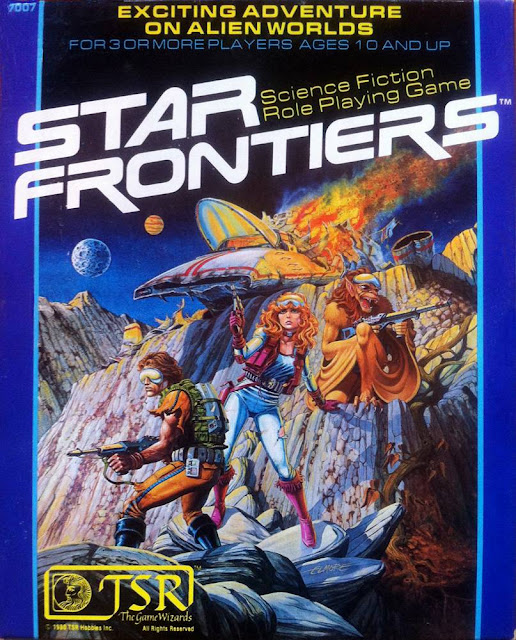 My first science fiction RPG was Gamma World but shortly after it I obtained Star Frontiers. Gamma World scared me a little bit. This was the early and mid 1980s. It was a time when nuclear war didn't seem all that unlikely a possibility. Yes, Gamma World was over the top and wild, but the setting of a fallen Earth always made me feel a little down.

Star Frontiers, on the other hand, was something I could get into. Gleaming towers, hover cars, laser pistols etc.

Let's talk a little about the setting of Star Frontiers. It takes place in the "Frontier", a region close to the center of the galaxy where four species have come together to form the United Planetary Federation - the UPF. They are Humans, Vrusk, Dralasites, and Yazirians. The Dralasites are short, rubbery aliens with no natural form - they are able to create limbs as needed, though doing so takes time - they aren't like Plastic Man. Dralasites love puns and bad jokes, making their worlds havens for unsuccessful Human comedians. The Vrusk are like a type of insectoid centaur - a bit creepy looking. They are a society largely centered around business and corporations. The Yazirians look a bit like tall monkeys with wing-like membranes between their arms and legs that facilitate gliding. They are a clan-based society and many among them pledge to defeating a life-enemy - something that is not always something to be defeated in battle - a researcher might, for example, choose a disease as his or her life enemy.

The game was divided into boxed sets. The first was initially called just "Star Frontiers", though it later had the tag "Alpha Dawn" added to it. The box contained two rule books - the basic rules to introduce the basics of the game and the expanded rules, which added lots of details like skills, expanded combat, etc. The second boxed set was "Knight Hawks" which added starship combat and operations to the game, as well as interstellar trade options. In the Alpha Dawn rules space travel was glossed over.

From the two boxed sets and adventures which came later we get a feel for the Federation. While largely benign, one senses it is a very loose government. Planets have their own militias, including small fleets. There have even been wars between member planets - for example, the Drammune system has seen numerous conflicts between Inner Reach and Outer Reach. Piracy is a problem in known and unknown space. Mega-corporations are practically governments unto themselves. The Federation is only concerned with the defense of the Frontier, collecting taxes to fund the Fleet and the Star Law Rangers.

Space travel is "hard-ish". Ships have no maximum speed, able to accelerate and decelerate as limited by fuel - and using acceleration to simulate gravity onboard. As a result, ships have periods of zero gravity and high-g maneuvers become possible on smaller ships. The combat system glossed over many aspects of vectored movement, something I later saw best handed in The Babylon Project RPG of the 1990s. A quirk of physics propelled objects into "the void" when they reached 1% of the speed of light - careful navigation allowing this to be used to jump from one system to another.

Characters used percentile-based statistics. They also achieved skills of varying levels, 1 to 6. Skill levels plugged into calculations that also used attribute scores to determine the chance of a skill succeeding. In order to get spaceship skills, you had to bring certain basic skills to at least 4, often 6 (depending on spaceship skill). This led to the oddity of needing to be a top marksman in lasers to begin gaining skill in spaceship energy weapons. The spaceship skills therefore required a lot of experience to obtain - and were expensive to improve.

Like D&D, characters tended to be able to take a lot of hits. Most characters would have a Stamina rating between 30 and 70. However, a projectile pistol would do 1d10 damage, though possibly 5d10 if a burst were fired. Characters tended to have defenses - screens and suits that absorbed a certain type of damage.

I played a lot of Star Frontiers in middle school. It was a lot of fun, though looking back the rules were definitely a bit on the unrealistic side. It played fast and for a time had a lot of support - many adventures and tons of articles in Dragon magazine. TSR made an incomplete effort at updating the game, with Zebulon's Guide to Frontier Space. It embraced the table-based game that was popular in the mid to late 1980s. However, it didn't update Knight Hawks, only Alpha Dawn.

One of the first internet groups I was a part of was a Star Frontiers mailing list, initially run by, if memory serves correctly, a University of Iowa or Iowa State student. They arranged small conventions in the mid to late 1990s - looking back, it was probably my first experience with a "proto-OSR".  I recall religious flame wars that occasionally popped up in the list. With the game out of print, I recall an effort to make a CD-ROM of the rules which TSR got wind of and, oddly enough, their internet rep granted partial permission to make. It's one of the reasons why you could find essentially legal copies of the game online. I'm not certain if that situation has changed, as I see Wizards of the Coast has begun selling copies themselves.
OSR rpg review star frontiers