The Next Generation of Gamers 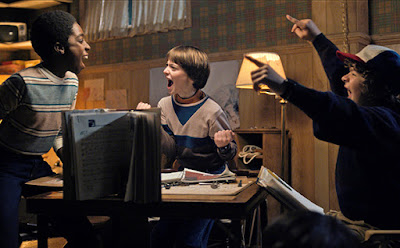 Watching season one of Stranger Things, I was thrilled to see the kids playing D&D. As I've said before, I was the same age as the kids - in fall of 1983 I was 12 years old, in the 7th grade. I'd been playing D&D since the end of the 4th grade in one form or another.

I probably wasn't all that good at it when I started. Heck I'm still learning.

My younger daughter is in the 7th grade. She's the geeky one of the two girls. Both my daughters are awesome, but when it comes to Stephen King, Star Wars, Doctor Who, and superheroes, she's the one. Quick aside - older daughter and I also share a lot as well. It was she who actually introduced me to Stranger Things, we both love New York City (and subway trains), Disney, and while little sister loves comics and superhero movies, big sister is the fan of the Arrow-verse shows.

Anyways, while younger one was in the hospital recently, we were talking about Star Wars - and she expressed an interest in trying a Star Wars game. I asked the players in my online group and them all being parents, were cool with her playing. They're all parents too and like the idea of passing it on to the next generation. I tried to sway her to the D6 Star Wars game but she really loved the funkiness of the Fantasy Flight Games incarnation - one of my players reminded me of the awesome feeling we had back in the day opening the D&D Basic Set and finding those weird dice, like nothing we'd ever seen before.

It was easy to underestimate her ability to grasp character generation and the basic rules - I'd really forgotten how young I was when I started gaming. She really liked the idea of talent trees and building up your character over time. From video games she already had a basic grasp of how one might build and develop a character. She built a Twi'lek Spy (Scout)/Force Sensitive Emergent. Inspired by Hera on Rebels, she named her character Athena.

The actual game went well - we played through the adventure in the Age of Rebellion Beginner Game. She was a little bit nervous - I think she was convinced her character would get blown away quickly - probably a legacy of playing Battlefront a lot (where she is an absolute terror). But she was also quite happy she was able to blow away some stormtroopers. It might be a bit much to have her always with us but everyone was good with her playing again. I'd really like to help her set something up with her peers.

Probably the most illuminating aspect was a reminder as to how young  was when I started gaming and to see the joy of being able to take on another role through new eyes.
home campaign star wars star wars rpg