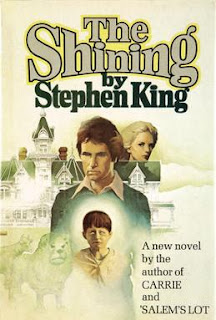 Stanley Kubrik's film version of The Shining casts a rather long shadow over King's original novel. Jack Nicholson did a masterful job portraying Jack Torrance, caretaker of the Overlook Hotel as he goes insane. However, the Jack Torrance of the film is rather different from that of the novel. To paraphrase Stephen King, of course he goes crazy. He's played by Jack Nicholson.

So let's take a look at the novel on its own. Set in the then-contemporary mid to late-1970s, it tells the tale of the Torrance family. Jack Torrance, the father, is a moderately successful writer who was fired from his teaching position for beating up a student who had slashed his car's tires. Jack is a recovering alcoholic who did not stop drinking because he broke his preschool son's arm but because he and his wealthy friend, Al, after a night of drinking, struck a seemingly abandoned bicycle on the road. What was it doing there? Did they hit someone? Jack as a child adored his own father who was also an abusive alcoholic.

His wife Wendy is a housewife. She loves her husband but is not blind to his problems. She was close to divorcing him when he stopped drinking. She has her own parental issues, with an overbearing judgmental mother who blamed Wendy for the breakup of her marriage and always suggests Wendy is an inadequate mother.

Their son, Danny, is gifted (or cursed) with a form of psychic ability - "shining". He has visions of things he shouldn't be able to see or of the future. He can read what people are thinking - often not intentionally. He often gets these visions via an "imaginary friend", Tony.

The family is up against a wall - with Jack unemployed the family is just about broke. Al gets job at the Overlook hotel as its winter caretaker. Located in the Rocky Mountains of Colorado, the hotel must close between September and May due to the extreme weather. His job is to keep the hotel in good condition, monitor the furnace and boiler, and prevent the elements from getting a foothold. The Overlook has quite a checkered past, including some organized crime murders taking place within it. It is haunted in some way, with the psychic impressions of all that happened there. Dick Halloran, who the Torrances meet when the hotel is closing for the season, also possesses the shining. He explains it to Danny and talks about some of the scary things that Danny might see because of his abilities - but he tells Danny they are just images, they can't hurt him. Though in truth, Dick isn't quite certain of that. Like the rest of the staff, Dick is leaving the hotel as it closes for the off-season.

At first, the Torrances time in the hotel goes well. It gives Jack a chance to clear his mind and make progress on the play he'd been working on. In their first several weeks , before the weather turns foul, the Torrances have access to the nearby town of Sidewinder. But over time the hotel begins getting to them, especially Jack and Danny. In a sense, Danny "energizes" the hotel with his psychic abilities. Jack becomes obsessed about the hotel and his drinking habits, save for drinking, begin to return. He engages in self-destructive behavior and his temper, always hard for him to reign in, begins getting the best of him. And then the snow hits and the family is trapped at the hotel, with Jack going mad and Danny a bight target for the hotel.

Unlike the film, Jack Torrance come off somewhat sympathetically. He's a bit of an ass, but he knows he is. He is trying to do better for his family. Despite once breaking Danny's arm in a drunken fit of anger, he is Danny's favorite. His son adores him. And for a time, he does begin to do better. It's unclear if he'd succeed without the hotel - his inner monologues show him to not fully have accepted responsibility for the mistakes he'd made - but with the hotel working on him he is very much a doomed character. The tragedy is he might have reformed on his own.

Like many of King's early works, The Shining deals with psychic phenomenon and explores the idea of a place absorbing impressions of what happens within it. King creates an interesting character in Jack Torrance who serves as both a protagonist and an antagonist. As the weather turns foul, it almost becomes a character itself, trapping the Torrances and making reaching them a near-impossibility for any would-be rescuers.

To this day, I think Kubrik's film version is a masterpiece, but he definitely made a very different tale than the one King told in his novel. They both work very well in my opinion, but both need to be considered on their own merits.