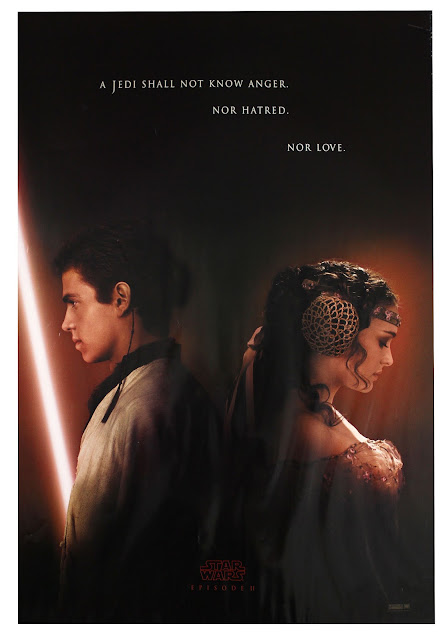 I've been rewatching the Star Wars movies over the past few weeks in bits and pieces. Watching Attack of the Clones I'm coming to understand what my problems are with the Anakin/Padme relationship and the missed opportunities - and what worked.

I do believe the fact that neither Anakin nor Padme are really equipped for a serious relationship was in fact intentional and probably a good dramatic choice (assuming it was). Anakin has spent his life first as a slave with his only real tie to his mother followed by a life in a quasi-monastic order. Padme has also spent a life of service, first as queen and then as senator. One gets the impression her personal life is fairly close to non-existent. Anakin can't see beyond the immediate "omigod I'm in love". Padme sees things a little more clearly, but nowhere near enough to view the possibilities of a relationship in any realistic manner.

Clearly Palpatine wanted them together - it kept her out of the Senate at a critical time and dangled a temptation in front of Anakin. It may have worked better than he had intended - after Anakin massacred the Tusken Raiders, Padme essentially gives Anakin a pass for the slaughter. One could have made the argument it was necessary - even the children would have grown up to be a threat. But Anakin admitted he acted out of hate and Padme explained it away that anger was human. After slaughtering Tusken Raider children in Attack of the Clones, the slaughter of the Jedi children in Revenge of the Sith becomes that much easier.

However, Anakin was far too much of a "stalker with a crush". His obsession was as clear as could be - and was rather frightening. Declarations of thinking of he every single day should have set off a million alarm bells in Obi-Wan. Moreover, even with Padme's lack of experience there's no way she would have gotten within a million miles of such a creepy stalker.

What, Dan, would you propose? To be honest, I'd not be taking a hatchet. Rather, I'd have had Anakin acknowledge to Obi-Wan "I had such a crush on her when I met her" but leave it at that - the suggestion that he's more adult, he's moved on. I'd also have made his relationship with Obi-Wan less filled with tension - I think his fall would have had more meaning if he was a more likable character in Attack of the Clones. Instead I'd slow down the development of the relationship between Anakin and Padme - let him realize he still has feelings for her and she him. By the time they're alone on Naboo they discover they've strong feelings for each other. It's no longer "Anakin wears down Padme" but rather a more organic, mutual attraction.

Much of what follows would remain - Anakin slips toward the Dark Side with the slaughter of the Tusken Raiders and his fear of Padme's death leading him the rest of the way has a nice classic touch of tragedy, where he sacrifices everything and in so doing makes him lose Padme - and himself. But by hiding his relationship from the Jedi Order and from his friend and mentor Obi-Wan, he's cut himself off from much of the guidance that could help him - which is just what Palpatine wanted.
star wars